I decided to read Coraline because it sounded like the perfect book to read in October. It had the Halloween feel without the bump in the night scary feeling of something lurking in the dark (which I’m not a fan of).

Coraline is about a young girl whose family moves into an old house that has been split up into three separate residences. Coraline’s family inhabits the main house while two retired theatre performers live in the house below – which used to be the basement. Up on top lives an older man who is training mice to perform in his circus. It’s a curious lot of people yet Coraline feels she isn’t being listened to or seen which makes her feel very alone. Until one rainy day when she discovers a locked door in the sitting room where her family is storing her deceased grandmother’s old furniture that her drab life suddenly takes a radical turn.

The story of Coraline takes you on a mysterious adventure into another world or dimension; a place where things look the same as they do in our world, but which are extremely different! In this other place Coraline is greeted by her Other Mother and her Other Father. They are just like her real parents except for the eyes. Their eyes are buttons. Coraline could overlook this aspect because it seems these parents are solely there to please her and Coraline is drawn to that attention. Everything seems perfect until her Other Mother and Other Father make a request of Coraline – they want her to stay with them forever, but in order for that to happen, she has to replace her eyes with button eyes too!

Coraline is a well written dark tale. It introduces interesting characters such as Coraline’s neighbors, the pesky black cat that can talk, and the mysterious Other Mother and Other Father that dwell in the world beyond the door. You’ll also meet a few ghosts in this story as well who are trapped in this other world. Because of the multiple characters revealed in this story, there is always something going on so this book would be perfect for the young middle grade reader because it’ll keep their attention throughout the entire tale.

I was surprised that I liked this book as much as I did. I remember watching the move and not liking it as much. The movie was a bit confusing and I wasn’t a fan of the artwork; however, the book is – get ready for it – SO much better than the movie. The book does a great job of developing the world Coraline discovers and the characters have so much more depth to them in the book. I would recommend reading the book even if you have seen and enjoyed the movie because I believe you’ll relish the story Neil Gaiman created even more once you’ve read the book.

Coraline movie introducing a new character – who is this guy??!

So upon finishing the book, I decided to re-watch the movie to see if my feelings about the movie would be the same or if they would be different now that I’ve read the book. Boy was I quite surprised to find how much the movie changed the story! There were new characters that weren’t in the book and new objects as well. The story was told in a different order too. There were so many differences that I became one of those people who adamantly declare, “Hey, that wasn’t in the book!” or “that’s not how it happened in the book!” LOL, yeah, the differences were that blatant. Suffice to say my views about the movie are about the same as when I first saw it back in 2009.

Okay, let’s get back to the book. This book included a few drawings and although they are fun to look at, I don’t think it needed them. The story is descriptive enough and I think the book would have been fine without the few drawings it contained. Plus the drawings were not very detailed, so I think they weren’t necessary to enhance the story. I would have liked to see colorful, vivid pictures instead of the black and white ones included in this book. However, the sketches can be useful to the younger reader who might need them to help with bringing this story to life. 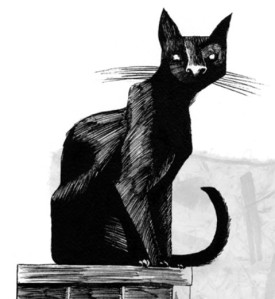 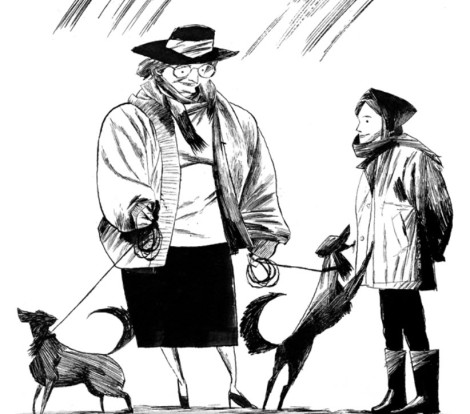 I would recommend this book to anyone over the age of 12. The book isn’t very long and this will help if your child isn’t really a reader because the size of the book won’t intimidate them. Then once they are reading about Coraline, they’ll be hooked and, hopefully, breeze through until the end!

Overall Coraline was a fun book to read and I think it fit well into my Halloween themed month of reading. Coraline is definitely a book I’ll read again and it may even become one of the books I reach for every year around Halloween time!