Reading The 9 Lives of Alexander Baddenfield by John Bemelmans Marciano was pure delight – although I’m not sure if that’s a good thing since this book deals with a bratty 12 year old boy who squanders the lives he is given without any recourse to his evil ways.  But, then, that’s what makes this book so much fun to read! 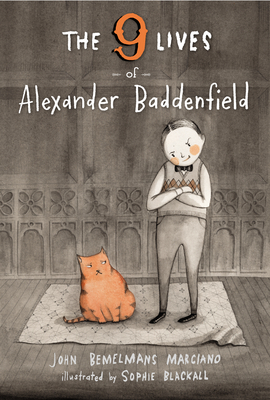 Alexander Baddenfield is the sole heir to the Baddenfield name and as such, he has decided he needs more lives because Baddenfields tend to die young.  To outwit death, he transfers his cat’s nine lives to himself.  Of course, once the operation is done (successfully, I might add) Alexander has to test them out to see if they work and from there we are witness to the misfortunate demises of young Alexander.

I have to say I really liked this book; even with the dire circumstances surrounding Alexander’s many deaths, this book also provided humor through Winterbottom’s perspective.  Winterbottom is the keeper of Alexander’s safety and to see Winterbottom’s interaction with Alexander, and his precarious ways, kept the story from being too dark and dreary.

Sophie Blackall’s illustrations were vivid yet dark in nature, which I liked and which I think will attract the attention of the young reader.  The pictures are sporadically placed between chapters and I liked to look at them after reading about one of Alexander’s adventures – he didn’t die in all of them!  The depictions were detailed and had me pondering what I had read. To me, these illustrations really added to the overall story.

Another part of this book that I liked was the way it was written; as if a story was being told to me.  Kind of like an informal conversation between the storyteller and me.  I liked this style of writing because it brought me into the story as a participant. I was there listening to a story being told about Alexander and Winterbottom.

My only minor complaint would be with the length of this book.  Since this book was less than 150 pages, I thought The 9 Lives of Alexander Baddenfield felt a bit rushed because the author had to fit all nine lives within so few pages.  I would have enjoyed reading more pages about each incident or more of Alexander’s life in general.

Okay, now for the ending…spoiler alert…yes, I’m going to tell you the ending just because it might have some relevance to parents who are sensitive to bad (in which I mean unhappy) endings.  So Alexander never learned the value of being a nice person and since he never learned that lesson, he stayed a self-absorbed child who didn’t have any regard for others or for Winterbottom.  As you may have gathered, he plundered all nine of his lives and when he finally died for the last time, his spirit descended to hell. Well, it doesn’t actually say hell but it implies Alexander went to hell because he “descended” and “felt heat” on his way down, which brings me to that conclusion.  Yes, it was a sad ending to this little boy’s life…end spoiler…

Due to the nature of the story, this is a book I can only recommend to the older reader even though it’s intended for the middle grade reader.  Because it deals with death and tells about the different ways Alexander dies, I would say it is really up to the parent since they would know the sensitivity of their child to such topics as death/dying.  Parents can also use this as a door to opening communication about death with their child by reading this with them and answering any questions which might come up as the story unfolds.  And although there really isn’t a moral to the story, parents can certainly add them to the story as they read about the bad choices Alexander made or how he treated certain people, etc.

So in closing, I liked the story about Alexander Baddenfield. It was a well written (and illustrated) story that grabbed my interest until the very end.