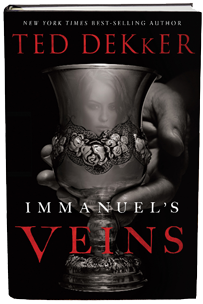 Immanuel’s Veins introduces a warrior, a servant in Her Majesty’s army, by the name of Toma Nicolescu, who was sent by the Empress of Russia to protect the Cantemir family during the time of the Russo-Turkish war of 1772.  It’s an assignment that seems routine enough until Nicolescu meets the dark and mysterious Vlad van Valerik the duke of Castle Castile.  The duke has eyes for one of Nicolescu’s charges, Lucine, who is also the woman Toma Nicolescu secretly desires for himself.  Determined to protect Lucine, Nicolescu soon discovers the sinister secret of Castle Castile, but does he have enough time and the knowledge to fight such evil?

I found myself drawn into the story of Toma Nicolescu and Lucine Cantemir, and the mystery surrounding Vlad van Valerik.  Since the story kept my interest, I read through this book pretty quick, anxious to see how it ended.  I read chapter after chapter…even when reading another chapter (and then another) kept me awake late into the night.

The characters mentioned throughout the book were intriguing, well developed, and added to the overall plot.  Although there were a few times I wanted to strangle these characters for the unwise choices they made, but I believe these actions made them more believable and more relatable to the reader.  There were even several occasions when I just wanted to jump into the story and knock some sense into one or two of them, however, the reality of my existence kept me at bay each time!  Plus these incidents helped to move the story along.

Ted Dekker created a suspenseful tale when writing Immanuel’s Veins, and I appreciated the vague insinuations made about the evil qualities of Vlad van Valerik.  This made the first few chapters alluring enough for me as I read them and it also fed my suspicions about Vlad, making me interested to see if my assumptions were indeed correct, or if I misunderstood the subtle hints provided by the author.

Besides the dark mysterious Vlad, this book included romance too; Toma’s love for Lucine drove his every action throughout the book.  The reader understood from the beginning, from their first encounter that these two were meant to be together.  Toma would have acted upon his feelings if it weren’t for the orders given to him by Catherine the Great and since he had sworn to protect Lucine and her family, he was not able to act upon the desire growing within him, and this unexpressed love complicated his relationship with Lucine, causing much turmoil throughout the story.

Due to the dark nature of Immanuel’s Veins, I would recommend this book to the teen or adult reader.  Since there is a bit of an unknown factor surrounding some of the characters in this story, I would also suggest this book to those who like a little mystery in their story.  And for those who love to read about people in the past, this book fits the bill since it is set in the 1700’s.  Like romance?  This story has a bit of that too!  Overall, the story was a fun and an alluring one which I think most people will enjoy reading.

“In Immanuel’s Veins, Dekker takes his storytelling to a whole new level, engaging the reader and taking them captive in a way that is as breathtaking and marvelous as it is gut wrenching.” – Josh Olds