After reading and reviewing numerous books from the blogging clubs I am currently involved in, I was happy to take a little break from that to scan my shelves for a book I have bought previously but haven’t had time to read.  During this search, my eyes fell upon this book and I decided to select this one for my reading pleasure. 🙂 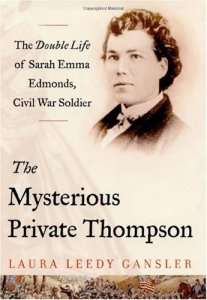 The Mysterious Private Thompson was a fun book to read.  It’s about a nineteenth century woman named Sarah Emma Edmonds or Edmondson who grew up in New Brunswick, Canada on Magaguadavic Lake.  At seventeen her father arranged a marriage for her and to escape that fate, Sarah adopted the appearance of a man and became a successful book seller.  When living in Michigan in 1861, she heard President Lincoln’s call for volunteers and Sarah, now known as Frank Thompson, enlisted in the Second Michigan Infantry.  As a soldier, Sarah encountered many adventures and after “deserting”, she again claimed ownership to her true identity.  She later married, had two sons and a daughter, all of which died at early ages.

This is a book I enjoyed reading for multiple reasons.  For one I love the history that was intertwined with Sarah’s story.  The history was not overpowering to the tale of Emma’s (as she was called throughout the book) life.  Instead it was a valuable piece to the story as it helped the reader to understand how women and men viewed each other during that time period.  It was also interesting to learn more about the Civil War and to read about the battles and strategies each side encountered.

Another reason I liked this book was because the story of Emma was interesting.  The author did a good job of re-telling certain stories about Emma, her friends, and of her encounters and experiences. This assisted the reader in understanding Emma and her motivation for doing what she did; disguising herself as a man and living that way for years.  Plus the stories were wonderfully told and held my interest throughout the book.

I would recommend this book to those who love to read history as a story; those who like to read history as written in history books might not be fond of this.  For those who enjoy reading about historical figures, this would be a book you would be happy to pick up and read.  Age recommendations, well, there are some war stories told that describe scenes of brutal combat but nothing most kids haven’t seen watching TV or playing war video games, which means this book could be enjoyed by most readers.  Although, due to the historical information, I’m not sure many 8 to 13 year olds would fine this that interesting.